This document describes the new features in Gtk# 2, the upgrade to Gtk+’s .NET binding.

We now use the toggle_ref API introduced in glib-2.8 to provide more accurate reference management for managed subclasses of GLib.Object. Toggle refs are a special class of reference that lets us determine if we are the sole owner of a native object. This is especially important when dealing with managed subclasses of GLib.Object. As long as unmanaged code holds references to a managed subclass, we have to artificially keep a managed ref around to ensure garbage collection doesn’t occur, since the objects likely contain instance data that would be lost if the managed object is finalized.

We have simplified and improved the notification and release mechanism for Gtk object destruction, eliminating a substantial number of leakage scenarios.

In the previous implementation, the finalizers invoked GLib.Object.Dispose. GLib.Object.Dispose would queue up the object for a timeout handler to process it. This approach caused problems for subclasses that override Dispose. Basically, any Dispose override would have had to do a similar timeout mechanism to ensure that any GObject operations they performed would not occur on the GC thread.

We now do the timeout in the finalizer itself. It queues up the object for a timeout handler which invokes Dispose on the queued objects. This ensures that all Dispose invocations occur on the “GUI thread” and takes the burden off the subclass author to do the switch in their Dispose overrides.

Exceptions thrown during native to managed callbacks like signal handlers and callback parameters previously caused stack corruption and were nearly impossible to debug. Trunk contains a new GLib.ExceptionManager.UnhandledException event that applications can connect to be notified of any exceptions thrown in these scenarios. The exceptions can not be thrown across the native to managed boundary so this is a mechanism to “catch” those exceptions and deal with them gracefully.

The following code snippet would display an error dialog and terminate the application:

Registration of GInterface implementations is now supported. Details on how to implement an interface with a tutorial can be found at ImplementingGInterfaces

Properties with a [GLib.Property (“prop_name”)] attribute will now be registered with the GObject type system. This feature is especially useful when creating custom cell renderers. (since 2.12.2)

We are also simultaneously releasing bindings for Gtk+ 2.6 and Gnome 2.10 in source form only. Gtk# 2.6.x is backward compatible with the 2.4.x releases via the new Publisher Policy mechanism. Once you upgrade your application to 2.4.x, you won’t have to change anything again during the 2.x series, unless you want to use the new goodies in 2.6/2.8/etc…

The Gnome About dialog has been cleaned up and integrated directly into Gtk.

Starting in 2.6, we have the popular new Gtk.CellRendererProgress and Gtk.CellRendererCombo renderers. Use them to expose ProgressBar cells and dropdown ComboBox cells in your TreeViews and NodeViews. 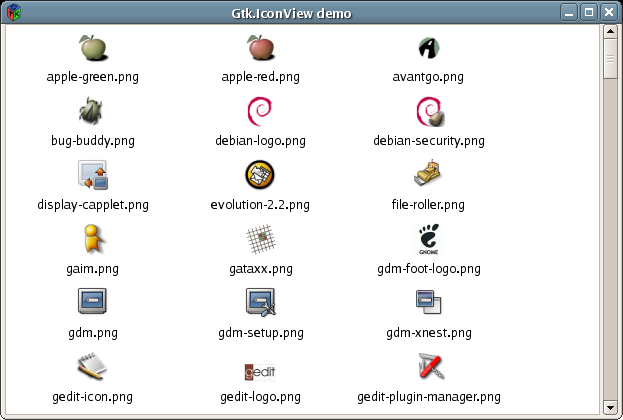 Any fields marked /*< public >*/ in the sources are now automatically exposed if you provide the glue-related parameters to your generation command. This feature is only available if you build glue with your binding.

Strings are now manually marshaled so that win32 encodings are performed correctly. Both UTF8 and filename encoded strings are supported. In 1.0.x, we used the automatic string marshaling of PInvoke which resulted in non-UTF8 encoded strings being passed to the Gtk+ libraries on the MS runtime on win32. The mono runtime defaults to UTF8, but the MS runtime does not. We now use System.Text.Encoding to manually marshal the strings to UTF8 and marshal them as IntPtrs to the native side to ensure proper encoding.

A huge bug has been squashed in supporting the CDecl calling convention for native to managed callback delegates.

Gone are the days of adding null_ok attributes to parameters that can accept NULL. The generator now automatically marshals null to NULL for the ref types.

We’ve improved support for automatic marshaling via metadata tags for GList and GSList return values to typed arrays. No more need to customize all those methods.

Several powerful widgets and objects were added in version 2.4 that are bound by Gtk# version 2.4.x. The following are some of the highlights.

A complete sample application utilizing Actions and the UI manager can be found in the sample/Action.cs file shipped with the Gtk# source or viewed on the web.

The old Gtk Combo widget was long a sore point for developers. The new ComboBox widgets utilize the power of the Tree/List Model API and provide a nice clean look. 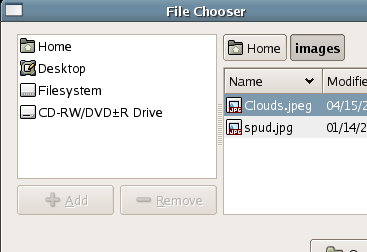 The new FileChooser interface is implemented by FileChooserDialog to provide an attractive and powerful way for your application to interface with the file system.

The new Toolbar widget comes complete with all the typical buttons and separators and provides a more attractive API to expose Toolbar User Interface elements either programatically or via the UIManager API.

Use the Gnome.Vfs namespace in the new gnome-vfs-sharp.dll assembly for virtual file system operations.

Use the PanelApplet object now exposed by gnome-sharp.dll to implement new Panel applets.

A full sample can be seen here.

New Extensions to the Bindings

The NodeStore is now interactive with new selection and view objects. Use NodeStore, NodeSelection, and NodeView to simplify the TreeView API with a nice attribute driven C# friendly syntax. 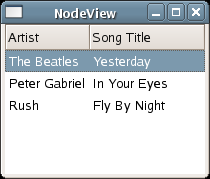 There is a [http:/GtkSharpNodeViewTutorial tutorial article] available showing how to use the NodeView convenience APIs to implement tree and list views like the one above in your application.

Use the new gtk-dotnet.dll assembly to open up the power of System.Drawing to your new application, or to port your existing custom controls to Gtk.

You can find a sample with various patterns in the Gtk# distribution in the samples directory as “DrawingSample.cs”

With version 2.4.x, it is now possible to create KeyBindings for your Widget subclasses by simply adding attributes to the class declaration.

It is now simpler to use threads with Gtk# applications using Gtk.Application.Invoke. This new API call can be used with anonymous methods to simplify writing code that must be executed on the Gtk# main loop, for example: