Note: This is a guest post by Jordi Mon Companys from Códice Software, a long-time Mono user, about how they used Mono to develop their flagship product.

Plastic SCM is a full version control stack. This means Plastic SCM comprises a full repo management core, command line (until here it would be the equivalent to bare Git), native GUIs on Linux, macOS and Windows, web interfaces, diff and merge tools (the equivalent to Meld, WinMerge or Kdiff3), and also a cloud hosting for repositories. Add Visual Studio plugins, integrations with the major Continuous Integration systems, IDEs and issue trackers.

Plastic SCM was first released in 2006 and didn't stop evolving in the last 13+ years, with 2-3 new public versions every week for the last 2 years.

Overall Plastic SCM sums more than 1.5 million lines of code and 95% of them written in C#. This means we have extensively used Mono for everything non-Windows since the very early days, now almost a decade and a half ago.

And here goes the story.

When the first lines of Plastic SCM were written back in September 2005, the decision to go for C# was already made. But we knew a new version control system could only be considered as a serious alternative if it was truly cross-platform. Windows-only was not a choice.

Why then, we decided to go for .NET/C# instead of something more portable like Java, or C/C++? The reason was clear: because Mono existed. We had never decided to use C# if Mono hadn't been there already. It promised a way to have cross-platform .NET and we invested heavily on it. How did it work out? Read along fellow monkeys!

Code once, run everywhere. That's what we embraced when we started doing our first tests with WinForms on Linux. 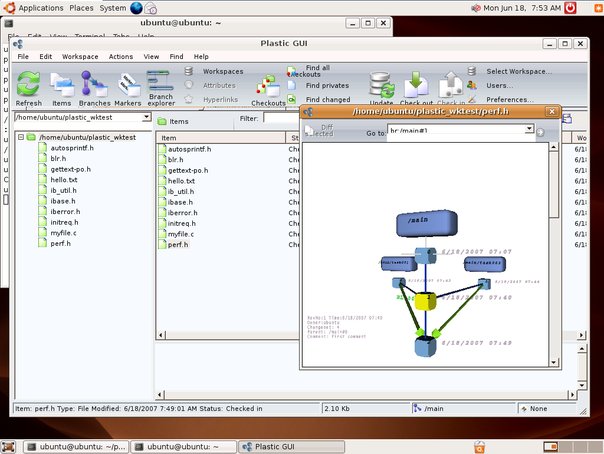 With very minor changes, the full Windows version was able to run on Linux and macOS (through X11). We later rewrote most of the controls we were using on WinForms to give them a more consistent look and feel: 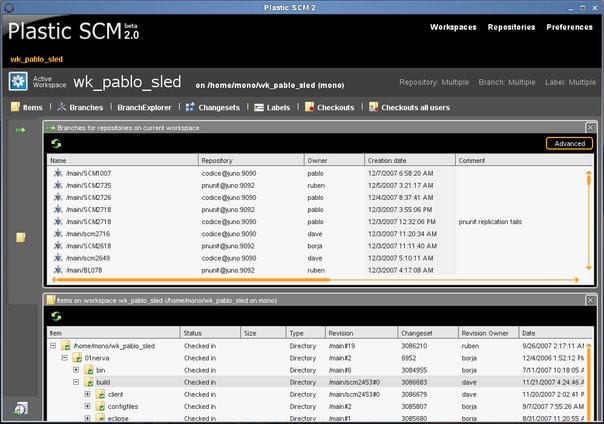 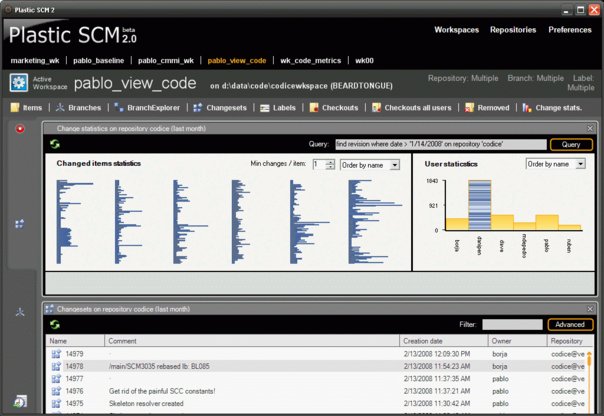 We also did this as a workaround to basically skip some well-known issues with some standard controls. Obviously, desktop GUIs were not a big thing in Mono, and we felt like pioneers finding our way through a wild territory :-)

Mono on Solaris - a story from the good-old days

Something many won't know is that for a couple of years we were the unofficial maintainers of the Mono port for Solaris.

We were lucky enough to hire a former Mono hacker, our friend Dick Porter, who enrolled to help us porting Plastic SCM to exotic platforms like Solaris and HP-UX.

By that time, we still relied on WinForms everywhere, which was a challenge on its own.

You can see how Plastic SCM running on Solaris looked like: 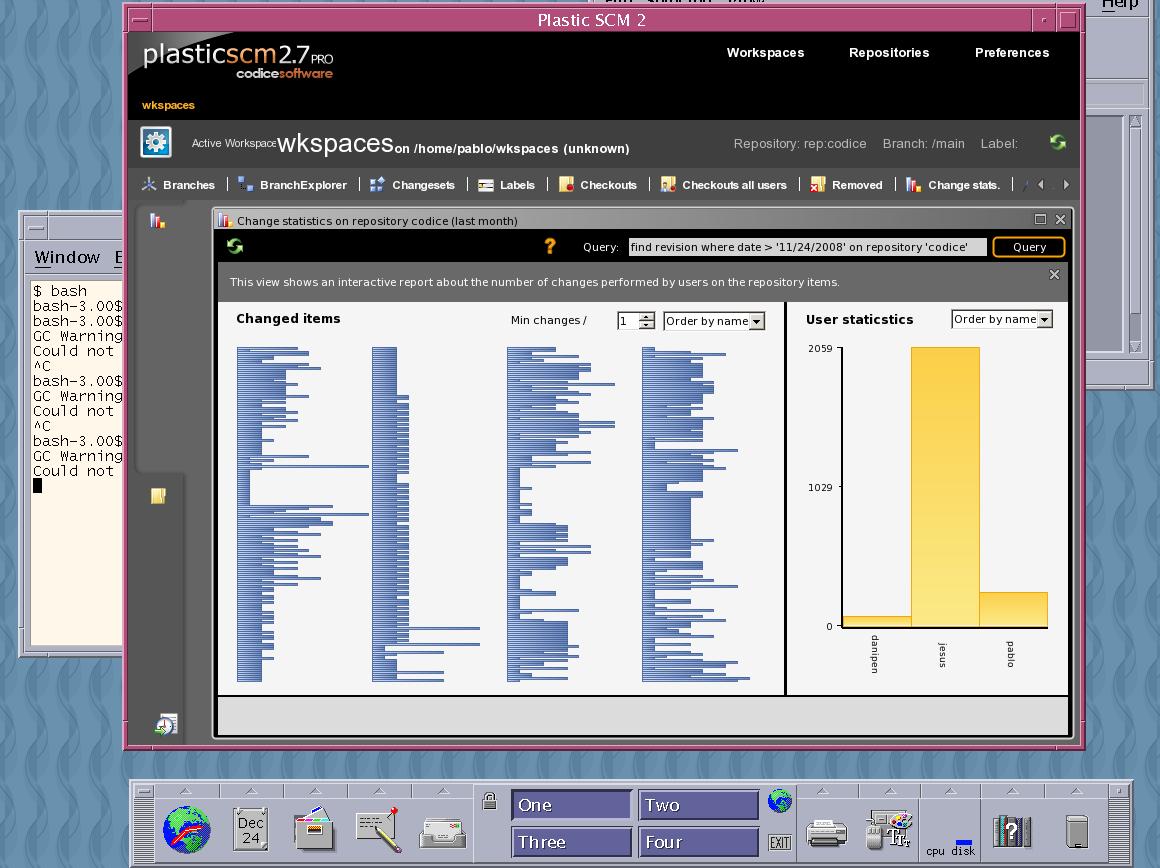 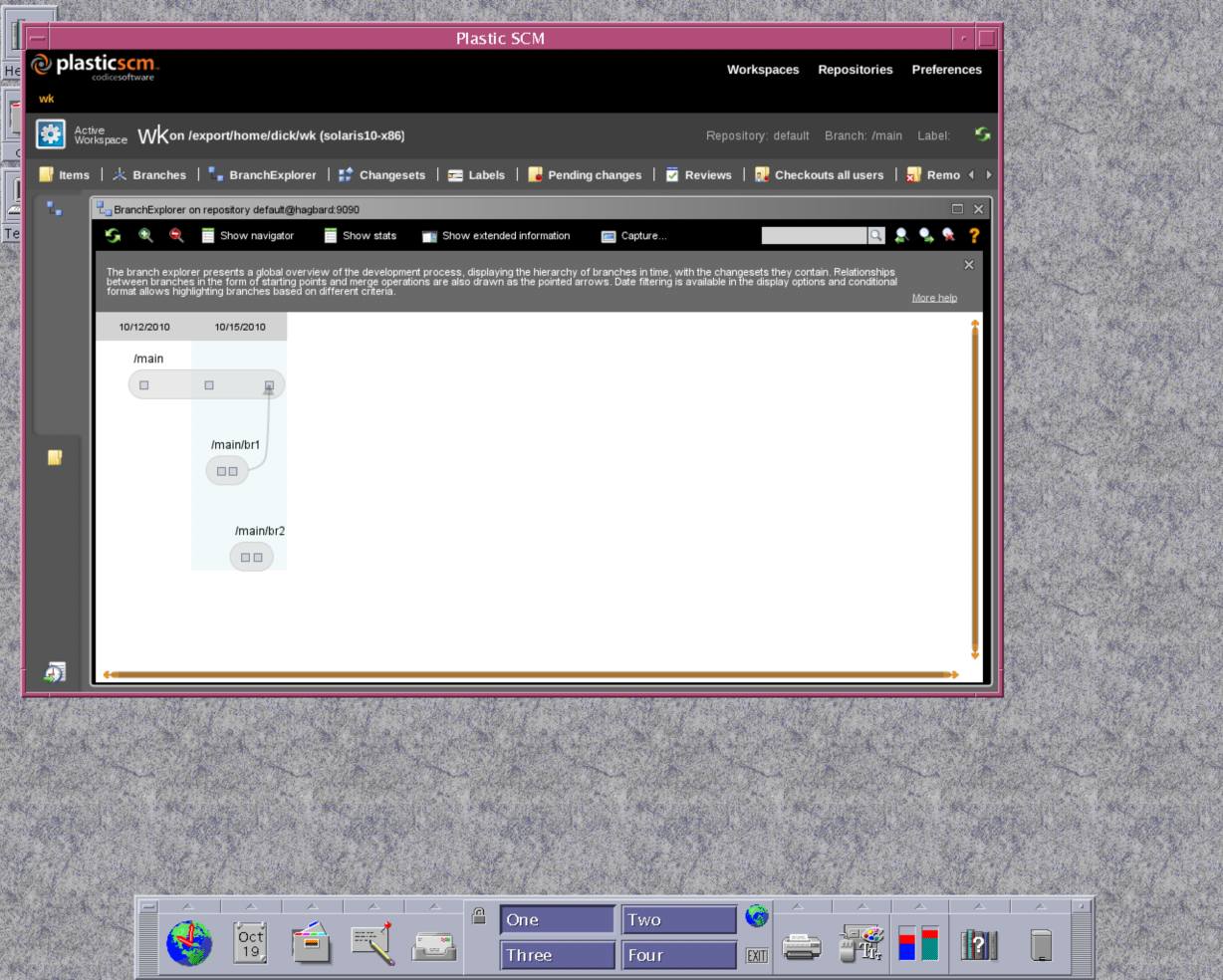 We were super excited about it because it allowed us to run Plastic SCM on some old Sun workstations we had around. And they featured SPARC CPUs, 64-bit big endian and everything. In fact, we found and protected some edge cases caused by big endian :-).

From Boehm to sgen

We were hit by some of the limitations of Boehm GC, so we happily provided the developers working on the new sgen collector with a memory hungry Plastic SCM environment. We used to run some memory intensive automated tests for them so we mutually benefit from the effort.

This was mostly before everyone moved to the cloud, so we ran most of these tests in about 300 real machines controlled by our in-house PNUnit test environment.

Depending on X11 to run our GUI on macOS wasn't greatly perceived by hardcore Apple users who prefer a smooth experience. So, we decided to radically change our approach to GUI development. We committed to create native GUIs for each of our platforms.

Some takeaways from this new approach:

This is how Plastic SCM looks now, enjoy: 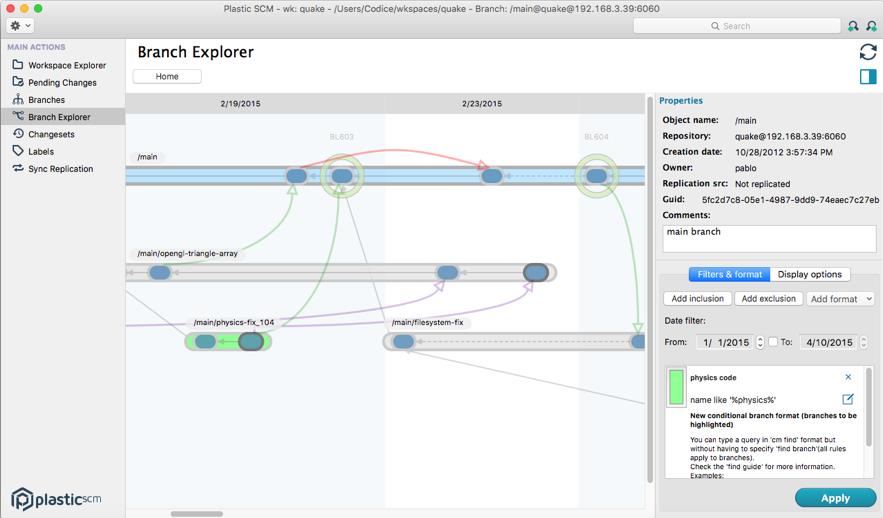 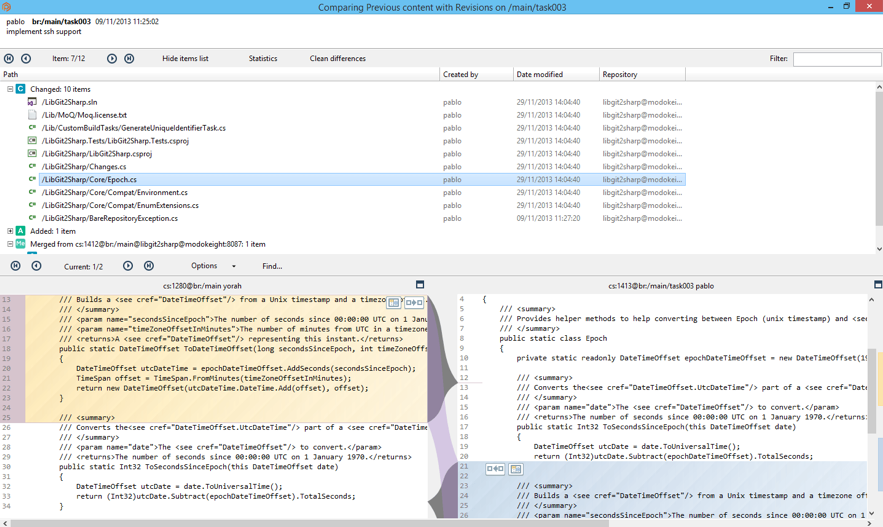 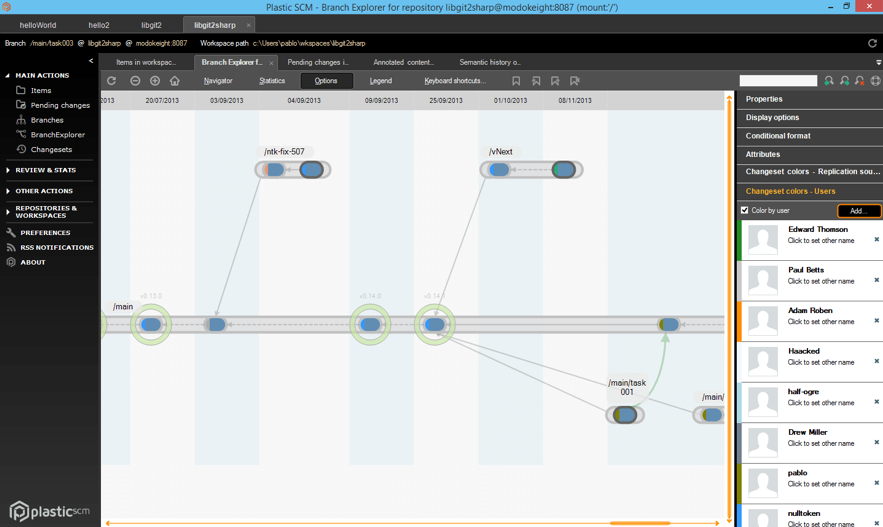 Many of you might think: how can a version control be written in Mono/C# and expect to compete against Git or Subversion or even Perforce which are all written in C or a C/C++ combination?

Speed was an obsession for us since day one, and we found C# to be quite capable if used carefully. The only downside is that when you are in a C#/managed world you tend to think allocating memory is free and you pay for it when that happens (something that radically changed with the arrival of .NET Core and the entire Span<T> and their focus on making the platform a real option for highly scalable and performant solutions). But, over the years we learned a few lessons, started to be much more aware of the importance of saving allocations, and the results backed up that reasoning.

Below you can see how a 2019 version of Plastic SCM compares to Git and a major commercial version control competitor performing quite common operations: 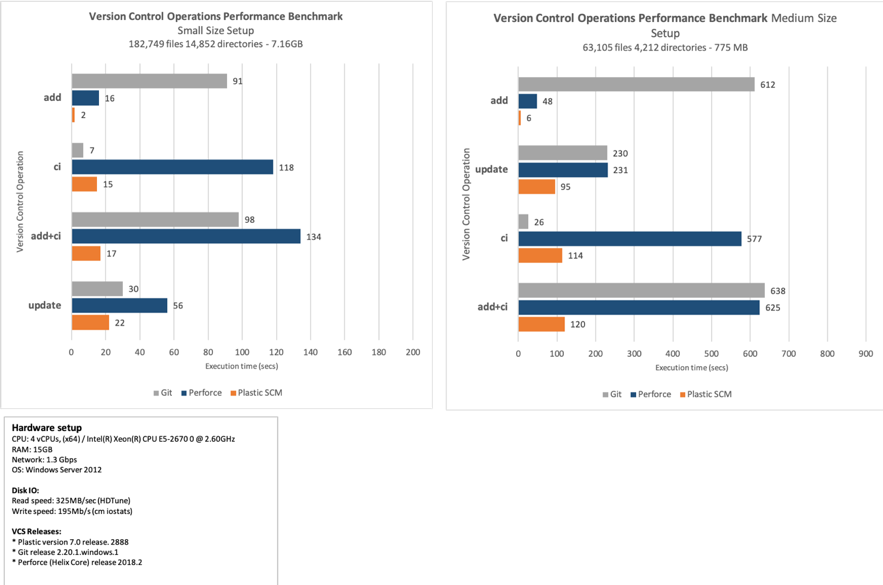 As you can see, Plastic SCM consistently beats Git, which we believe is quite an achievement considering it is written in .NET/Mono/C# instead of system-level C.

In terms of pure scalability, we also achieve quite good results compared to commercial version controls: 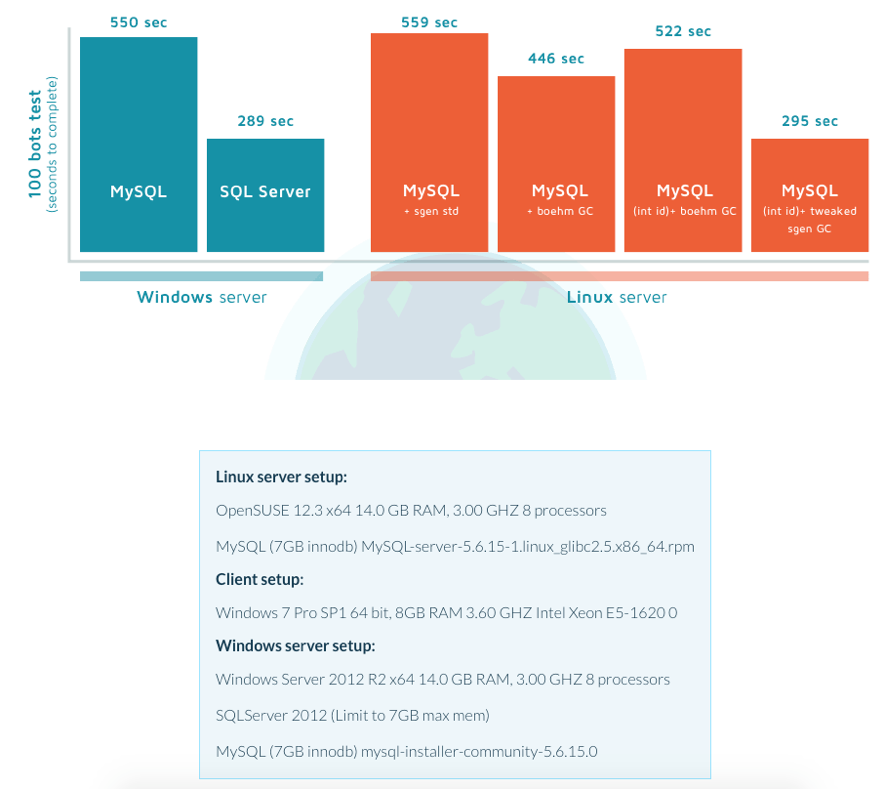 We don't compare to Git here since what we are running are pure centralized operations (direct checkin or commit if you prefer) something Git can't do. Plastic SCM can work in Git or SVN modes, local repos or direct connection to a central server.

In fact, some of our highest loaded servers on production run on Linux/Mono serving more than 3000 developers on a big enterprise setup. A single server handles most of the load singlehandedly :-)

Mono is indeed for code monkeys

If you’ve read the whole use case you already know that we have been using Mono for the purpose of providing a full version control stack since 2006! That is for almost 13 years, right after the company was founded and the first product of our portfolio was delivered.

After all this time it has helped us build and distribute the same product across the different environments: a full stack version control system that is pioneering software configuration management in many areas. The results are there and hey, we are demanding: versatility, performance, scalability and resilience are not an option for our clients, or us. Given the structural relevance of SCM tools to any software project, it is paramount for Plastic SCM to deliver a solid product across all platforms, and we do it. To us Mono = cross-platform and that is a huge advantage since we can focus on functionality, roadmap and support while Mono makes the product one same experience everywhere. Mono is definitely a foundational part of toolkit.