In this article we will discuss how you can use Mono to increase your productivity and make your software applications extensible without having to rewrite any of your existing C or C++ code into C#.

This technique has many names: application scripting, runtime hosting, runtime embedding. They are all the same thing.

In the past, software used to be written entirely in a single programming language. Developers had to strike a balance between high performance and having to pick a low-level language or slower execution speed but using a high level language.

For example a C/C++ application would look like this: 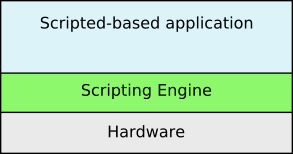 Picking one or the other is a difficult choice as there are many nuances that software developers face. The high-level languages are more productive and developers get more done for each line of code written. But high-level languages come with a price, the software does not run as fast as it could and sometimes requires more cpu, more resources and in some markets might make the difference between a successful project or a failed project.

Developers have turned to scripting as a mechanism to balance the best of both worlds, the idea is simple. The engine of the application is developed in C or C++ and usually maintained and developed by the veteran members of a team, while pieces of the UI, dialogs, interaction, or non-performance critical routines are written in a higher-level scripting language. 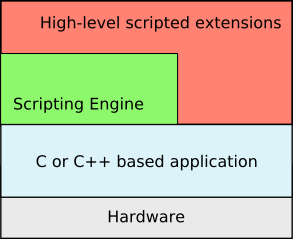 This idea was for a long time championed by John Ousterhout. You can read some of his discussions here.

The following figure is a slightly updated version of John’s figure:

Historically, developers have turned to different technologies to implement scripting, from the very simple “batch processing” languages, to evolutions of those (Tcl, the tool command language comes to mind) to some custom in-house developed languages (Second Life’s LSL is a good example) to more mainstream languages like Lua, Perl or Python.

Some languages were designed with embedding in mind from the beginning (like Python) which makes embedding Python very simple. Other languages are embeddable but the embedding API is not as clear as it could be, and mostly they expose the internals of the language and merely allow for the language to be embedded.

You can think of the speed of languages as a progression (and here am taking a few liberties, but this is just for illustration purposes), roughly it goes like this:

As I said, the above is just a rough approximation.

This is why many developers tend to look for more mature language implementations when possible.

Extending your applications has many benefits. By using a scripting language, you will get an environment that is suitable for quickly prototyping without having to rebuild your core product for small changes, or polishing an existing application.

Scripting languages also offer a secure execution sandbox that allows high-level developers to quickly prototype and experiment without having to worry about many low-level details of the core C engine and without having to take care of some of the more mundane details like resource management and memory management, vastly simplifying the development of applications.

By splitting the responsibilities between the engine developer and the scripting developer, it is possible to reduce the complexity in a software project and it allows developers to focus on the bigger picture instead of having to learn all the details of the underlying core engine implementation for your software and the various rules for resource management that you might have.

Mono offers the same functionality that developers have used to extend their application with a safe environment for scripting language with Just-in-Time compiled code.

Scripting languages tend to be interpreted, and as such are not as fast as native code. Mono expands the option of scripting language users to use languages that are suitable to be JIT-compiled into native code. The performance is typically much better than those of a scripted language and many of the high-level language benefits are still available to the developer.

It also offers a wide variety of programming languages depending on the needs of your software.

Scripting an application usually exposes some of the internals of the low-level code in one way or another. Usually there are handles or object systems that are surfaced for the scripting developer to consume. The developer of the binding will typically have to design the system to allow for the scripting language to consume it.

Higher-level constructs and game play are typically implemented in a scripting language. The problem that game developers face with scripting languages is that they are usually the major performance bottleneck in a game. After spending years fine-tuning their C, C++ and assembly language code and taking advantage of every little trick in their GPUs, the game play ends up running very slow because the scripting language is just not as fast as it could be.

Consider SecondLife, an online 3D virtual world that is scripted with the LSL programming language. An ongoing effort at Linden Labs is replacing the LSL scripting engine with the Mono runtime. They have written an LSL compiler that will generate the ECMA bytecode consumed by the Mono runtime, this allows them to keep all of their existing scripts running without modifications and get the advantages of Mono.

The early results of switching showed that there was a 50 to 150 times performance increase in switching from LSL/interpreted to LSL/Mono.

The Unity3D game design engine uses Mono to provide scripting capabilities to the applications and games built with it by supporting Boo, C# and UnityScript (a strongly-typed version of Javascript which helps make the code faster).

In addition, developers get to reuse their experience with C# and the .NET class libraries with their game, companies get access to a larger pool of developers that are experienced with a mainstream language and they can focus on creating the best possible game play instead of spending precious resources and time implementing yet another virtual machine, another set of debugging tools and a new ad-hoc language.

Mono is an open source technology that can be used freely under the terms of the MIT license (as of March 31st 2016, prior versions were available under GNU LGPL license).

We are committed to improving Mono’s JIT performance and code generation quality. In the last year plenty of optimizations have been done to the runtime in many areas and applications run as much as twice as fast just by upgrading to a newer version of the Mono runtime.

As Mono matures, and its JIT compiler evolves you can expect bigger performance improvements becoming available for your software.

Using Mono in your Application

Now that you have seen a high-level overview of what scripting with Mono can do, you can take a look at the Embedding Mono page for the actual technical details of how you consume the Mono runtime in your application: how you compile against it, and the APIs that your application can use.