My project is lambda support in the MonoDevelop debugger’s expression evaluator, used in the Immediate pad.

All of my work is covered by a single pull request: here

Summary of the implementation 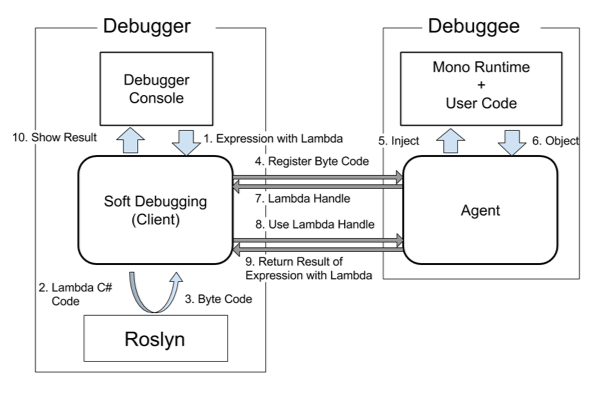 There are 2 tasks to support lambdas:

We firstly resolve references outside the lambda like local variables/properties (e.g., x in a => a + x) in order to reproduce the current context of the debuggee. Then we compile something like the following code with assemblies currently loaded in the debuggee, and get a .dll.

lambda-type in the example above is a type name for lambda (e.g., Func<int, int>), local-variables-list is comma separated pairs of a type and variable name for local variables (e.g., int y, int z), and lambda-expression is a lambda inputted by users. (e.g., x => x + y + z)

We send the compiled assembly to runtime, and invoke Assembly.Load with it in runtime. By calling injected_method through reflection APIs, the lambda value becomes accessible from the debugger.

Lambda type resolution is delayed in this project as it’s not decidable without how it is used. When users input (x => x + 5), it is undecidable which type is the most plausible out of following types.

If your C# code has Method1(x => x + 5) and Method1 is defined as Method1(Func<int, int> f), the type of the lambda is determined to be Func<int, int>. This means lambda types are determined by not only themselves but also the context. In other words, we have to delay type resolution for lambdas. Lambdas will be compiled and become a value after the type is determined.

Note: in the debugger, types for expressions are usually determined in depth-first order.

We treat the body of a lambda as a black box because of lambda parameters. Even if it’s possible to infer an unknown type of x in x => x == 5 for example, it wouldn’t be a debugger’s business. Also it couldn’t be realized in this project.

Users can omit a path to a method (e.g., namespace) when invoking methods inside the lambda. The path will be added automatically like the following cases.

It’s not supported invocation of static/instance overloaded methods in an instance context. This is because we have no information of types for expression inside the lambda. (e.g., Assume that current context has static Method2 (int x) and instance Method2 (string x). If lambda expression is (x => Method2 (x)), we can not resolve the overload until resolving parameters types.)

All of code is covered by a single pull request, which is still open. Hope it’ll be merged.

Currently, only public type access is supported. A tentative plan is following.