This page is likely outdated (last edited on 27 Feb 2009). Visit the new documentation for updated content.

Notes on the Moonlight implementation and notes on bringing Silverlight to Linux.

If you are using Firefox on the desktop at the same time as you debug Moonlight, you will want to create a separate profile that you can use to debug Moonlight.

To do this, start firefox from the command line with the option:

Create a new profile, give it a name, and then in future invocations, use:

Since there is no way of passing command line options to the Mono VM embedded in the plugin, you can always wait inside gdb for the first time you get a breakpoint (it happens when the GC scans memory for the bottom of the stack) and you can set some o the debugging variables like this:

In the above case, I set the break-on-unverified debugging option that will break into the debugger when unverifiable code is found.

Books on WPF are good resources, although they cover the “larger” API of which Silverlight is merely a subset.

Some notes that are relevant to WPF have been moved to the WPF page.

Adam Nathan’s book on WPF is very good, and it goes into some of the technical details that other books merely skim on.

Developers can create Silverlight 1.0 applications without any extra dependencies in MacOS and Linux. Silverlight 2.0 can optionally use C# and the .NET framework to create applications.

For users of Silverlight 2.0 we are creating an SDK that developers can use to create applications on Linux, Unix and MacOS.

For Developing on non-Microsoft Systems

If you install Mono as described in the Getting Started section you will get an SDK that you can use to develop against Microsoft Silverlight and Mono Moonlight APIs.

Instead of using the mcs or gmcs compilers as you do regularly with Mono you need to use the smcs compiler that will generate and reference the proper assembly versions that are suitable for Silverlight development.

Since Linux and MacOS developers will not be able to run Blend on their operating systems, we have created a XAML designer. This XAML designer is located on SVN in the module “lunareclipse”.

Lunar Eclipse currently is a standalone desktop application but we want to build a MonoDevelop add-in to have a full Silverlight development experience and possible also port it to the web to provide a designer that MacOS users to use.

It also looks like the current VS.NET Orcas can’t help much to create Silverlight code based on the security attributes:

We should look into building such support into MonoDevelop code completion.

Mono has not historically been used to run untrusted code inside the virtual machine. Although we have done some work towards the implementation of the CAS this work has not been completed.

Silverlight 2.0 introduce a new security model to replace CAS for it’s applications. This model is discussed in details here.

Details about how Moonlight implement this features can be found here.

While this new security model looks easier to implement, wrt to the stackwalk-based CAS, most of the requirements for the MonoSandbox are still needed to provide a safe execution environment.

A few other things must be completed:

Currently Moonlight implements its own media pipeline (fetching, streaming, demultiplexing) and uses ffmpeg codecs to decode audio and video. This is the default when you compile the source code yourself.

For the official release we will be using Microsoft’s MediaPack a package that will provide Microsoft’s own codecs for Moonlight. This code is currently under development.

Silverlight is an extended subset of the 2.0 .NET framework. Existing assemblies (ECMA) are versioned as 2.1.0.0 which are reduced versions of the 2.0 libraries and have been annotated with the security attributes and have been expanded in a few areas.

Silverlight introduce new assemblies, all signed by the Microsoft key and versioned at 1.0.0.0 - except for AGCLR.DLL which isn’t versioned in 1.1 Alpha (bug?).

As we can see in next figures Silverlight doesn’t have any circular dependencies between it’s assemblies, unlike Fx 2.0, which is good news and will reduce our build time (no special loops in the Makefiles like we have today). 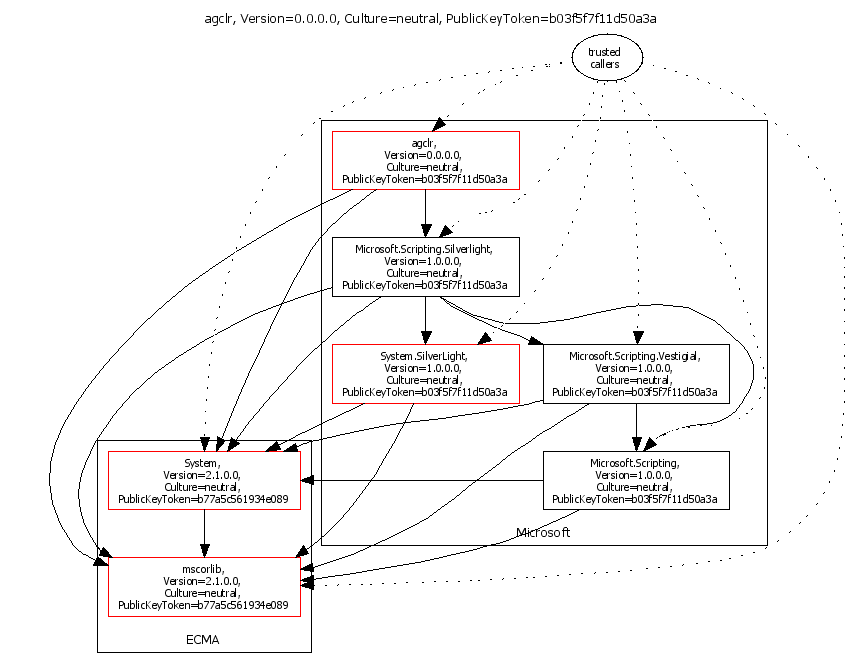 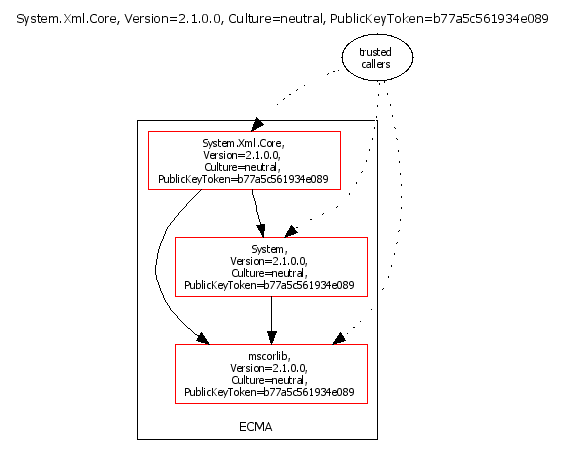 We introduced a new NET_2_1 define and a new net_2_1 profile in the build system. The resulting libraries would be a superset that encompasses both 2.0 and the 2.1 API, but since 2.0 and 2.1 only have a few intersection points we will probably expand the Cecil Linker to specifically tune the 2.1 library to its right size without entering the world of pain that it would be to maintain the 2.0 and 2.1 defines at the same time. 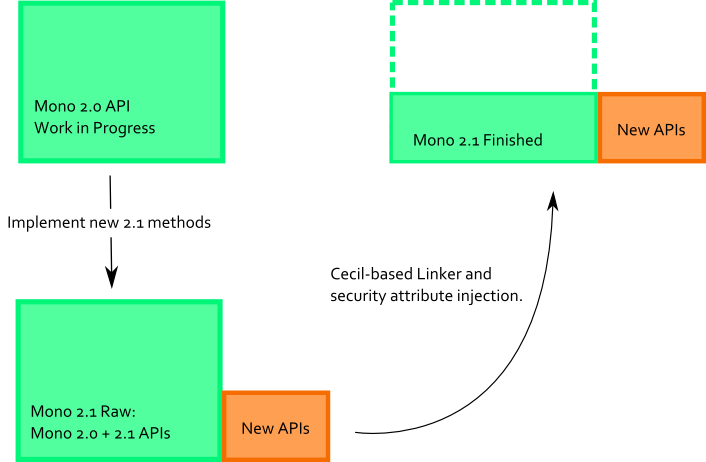 I would like to avoid an ifdef mess, my personal hope is that we can create probably a new profile NET_2_1 that would be a superset of NET_2_0. The result would be a larger assembly than we need to have.

At that point, we should use the Cecil-based linker (which will have to be modified) and have the linker strip out all the public code that is not necessary in the 2.1 profile.

Note: I generated the corcompare output, but it is hard to read because many issues boil down to the missing attributes, so a first step might be to write the injection library to reduce some of the noise.

Note: For the curious the Microsoft BCL Blog Team has published a list of the BCL classes available in SL 1.1 Alpha. Note that this is not complete (BCL only) and subject to changes.

Since there is no SDK documentation shipping with Silverlight 1.1, one way of getting a list of APIs to implement is to use the procedure described in this document: Explore Silverlight Assemblies with Visual Studio Object Browser.

Alternatively, you can use `monop2 -d assemblyname.dll’ to get a list of classes and APIs from the Silverlight installation.

As part of the Google Summer of Code some of the APIs in this assembly will be implemented, but there are some areas that will not be implemented as part of it. There is currently nobody signed up for working on the Syndication APIs. And although these are not part of the Silverlight 1.1 release, they are on the roadmap.

This contains the interface to the rendering engine and lives in two parts:

It is probably simple for those that want to contribute to start work on the classes that do not derive from DependencyObject. We should follow the regular process: write nunit test cases to understand the API, and then write the API.

Currently the plan is to have the C++ code mirror the C# class hierarchy, and it will be responsible for rendering and for loading XAML files into memory.

There are some stubbed out some classes in olive/class/agclr, but they are not complete and no real work has happened, there are just bits to see how pieces fit together.

Mono 1.2.4 is not able to build the DLR, you can either use SVN of mcs, or you can use Seo’s patches for the IronPython/DLR distribution from here

Mono currently does not have a complete LINQ implementation, we need to complete those. They currently live in the mcs/class/System.Core directory.

There are plenty of things left to implement in the LINQ namespace.

We are currently using Cairo for rendering, but every once in a while we consider the use of AntiGrain, there are pros and cons to each one, and we have not really done any real work to compare one against the other in terms of performance yet.

Antigrain 2.4 is licensed under the MIT X11 license, which would be very good for embedded vendors, while Cairo is LGPL/MPL which is less friendly in some settings. Sadly Antigrain 2.5 is now dual-licensed under the GPL/commercial so we could potentially be stuck maintaining a 2.4-based codebase.

Agg 2.5 will ship with a libsigc++ license that will allow us to treat the code as MIT X11 unless the code is pulled out, allowing Antigrain to be used internally for Silverlight and allowing them to license Antigrain for other customers.

Silverlight is a small subset of WPF.

There are also at least two threads: one that responds to redraw requests (to ensure that the content is always rendered regardless of whether the application is busy) and another that drives the process.

In some early discussions with David Reveman (the designer of Xgl and Compiz), we are considering the definition of a rendering scene protocol that would allow in the presence of Compiz offload the work to the compositing manager and take advantage of the direct hardware interface that Compiz has.

The Plugin and the DOM 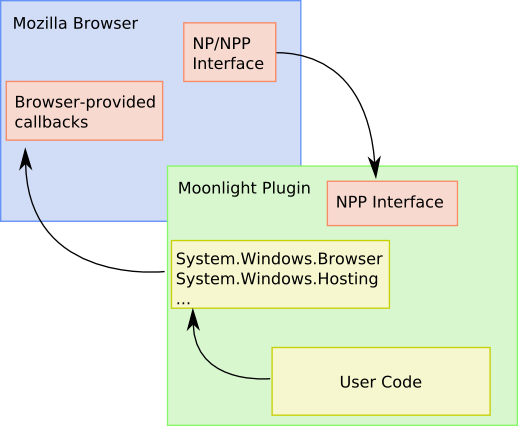 Plugin relation to the Browser

The plugin will have to expose the internal tree structure to its host, this is simple to do, documentation on how to write Mozilla plugins is available here. Work on this will probably have to wait until we get the API to a reasonable state.

The other direction (plugin communicating with the browser) can be started right away. This is the System.Windows.Browser and System.Windows.Hosting namespaces (they live in System.Silverlight.dll).

Our initial goal is to support Mozilla so this should not be too hard.

Currently only one instance of the Mono virtual machine can live in a single process (the GC, signal handling, segfault handling all are controlled by the Mono runtime).

The JavaScript compiler does not look like it will be open sourced, but some comments from the Mix conference indicate that it is probably a small compiler (scanning and parsing) that defers most of the work to the DLR (already open source).

We have a runtime we could start from already, but it will likely require some changes, while the Javascript compiler seems relatively trivial to implement.